It’s Ward 2’s turn over at the Asylum of StampInsanity! This week we are challenging you to create a Fancy Fold card! I created what was supposed to be a swing Card…but somehow I royally f’ed it up! So, it still sorta swings…but it stands too. I’ll just let you take a look! 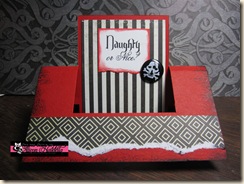 Here it is, standing on it’s own. Which, I think is nifty…especially since it looks like it’s levitating! Which totally works with the image I put on the other side!!! The Naughty or Nice senti is of course from a Holiday set…but I think it works rather well here! 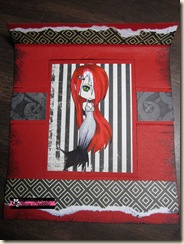 I used Lilith for the other side. I just ADORE this image. She is just SO cool! And see? She’s floating! I had thought about adding some 3D stuff to the “inside” of the card…but then it wouldn’t lay right when it was flipped. So I opted to keep it simple. 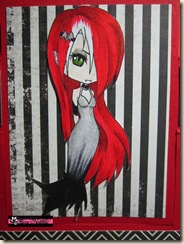 I wanna be as cool as Lilith! She’s so pretty and mysterious! And check out her eyes! They are so rad! I colored her in with my watercolor markers from EK Success. If you click on this (or any other) picture, you can see it bigger. And then, you can really see the shading in her hair. It’s kinda hard to see when it’s small.

So even though I goofed on the fold of the card, I still really like it. It’s a little creepy and mysterious. Wonder what the rest of the Groovy Gurlz are up to? Then go check out their creations! Have an inspiring day!!!

Sparkly Engineer said…
Oh I saw this card over at Stampinsanity and just loved it. You have a great image and wonderful color and paper choices. Love the way you colored you image to
May 20, 2011 at 12:03 AM

March 10, 2016
This is a very exciting week for the Stampendous team! We are hanging out with the ultra cool Deco Art Mixed Media team, each using each other's products to share some incredible creations with you. These companies go hand in hand, so using each other's products is easy. And the results are amazing. We are of course featuring Andy Skinner's stamps, who is the DecoArt International Education Coordinator.  And yup, there are prizes! But I want you to go to the Stampendous Blog for all of that info. The link is at the bottom of the post. Now, on to my project. I made a cool wall hanging today. I started off with a piece of MDF and I drilled 2 holes, and covered it with DecoArt's white Gesso. After it dried, I used Andy's Alcohol and Media fluid Acrylics Layering Technique. You can check out his how-to video HERE . Needless to say, it's a great technique, and I loved doing it. Once I finished with the aforementioned technique, I sealed the piece w
58 comments
Read more