April 14, 2015
Have you seen or heard the news? I am part of the Stampendous! Design Team! I am beyond excited about this. Especially since Stampendous! now owns Dreamweaver Stencils. This is a match made in heaven, and I am so happy to be along for the ride. Stampendous! is pretty excited about their new acquisition, and they wanted to do a week of fun stenciling projects to show off some of the many things that they can do. 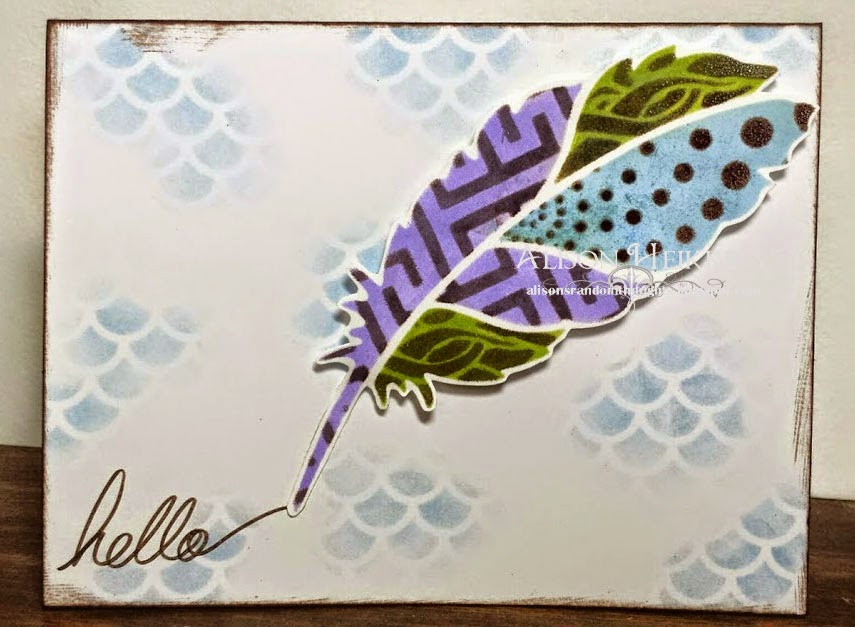 So, how many stencils did I use for this card? 1? 2? Actually, I used 5! The beautiful Feather stencil is one, the Scales in my background, and then on the feather, I used the Spiral Dots, the I Beams, and the water from the Frigate stencil (the green portions) too! 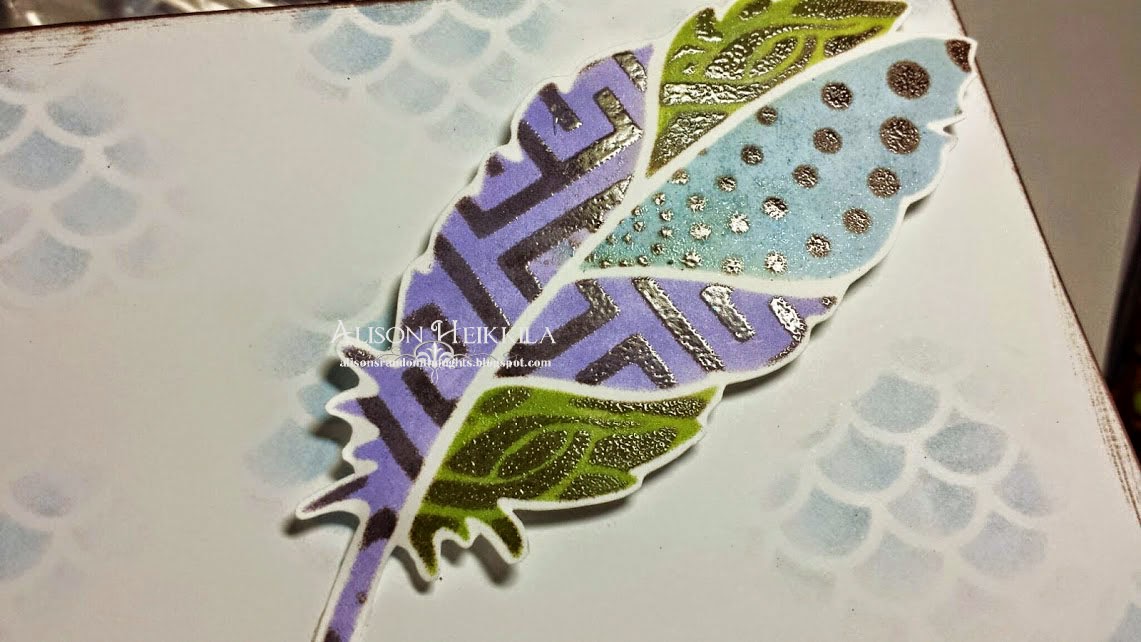 I started off by inking each of the colors on to the feather. Remember that when you do this, you need to mask off each section so that you don't put the wrong color in the wrong spot. After that, and leaving the feather stencil in place, I laid the various design stencils down where I wanted them (one at a time, of course), and inked them all with brown. My brown ink was a pigment ink, so it stays wet for a while, which makes it perfect for embossing. So I used clear embossing powder on top, to give it a nice sheen and some dimension. You can see it really well in the photo above. 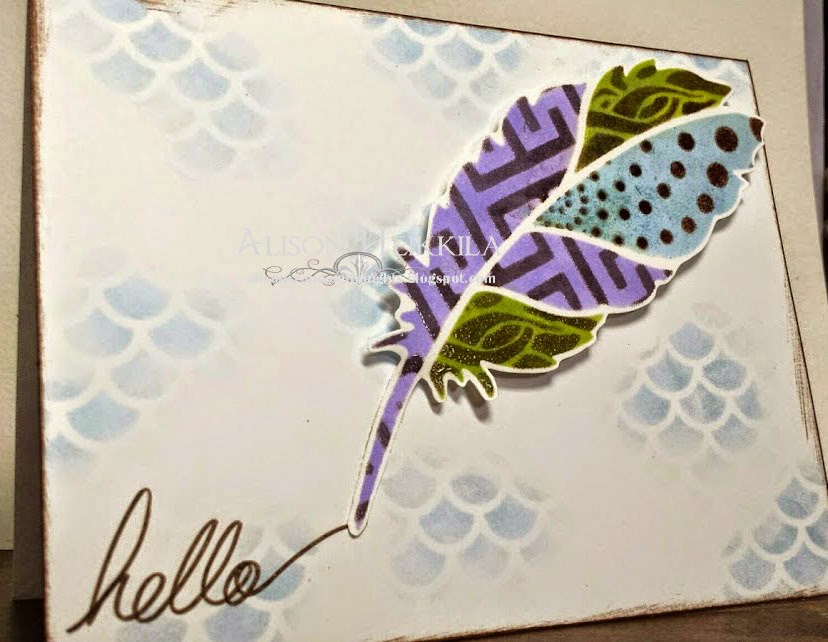 Then, I fussy cut the feather out, and laid it aside while I randomly stenciled my Scales right on to my card base in blue. I inked the edges of the card base, and laid my feather down where I was planning on adhering it. I wrote out the "hello," and then attached the feather (mostly with pop dots for dimension), at the end of the word so it would look as though the feather wrote the hello out. I hope you like my card. Thank you so much for stopping by. Have an inspiring day!

ike said…
Ooooh - that is AWESOME !!! Fabulous card and many CONGRATS on your new venure :-D

barbara macaskill said…
Very pretty! LOVE the multiple stencil patterns on the feather and the scales in the background are really cool! TFS!
April 14, 2015 at 12:05 PM

Viki Banaszak said…
That is so pretty! I love all the colors and different stencil designs that you used.
April 14, 2015 at 1:57 PM

Stampendous said…
We are so glad to have you on the team and with so much Dreamweaver Stencil experience you'll be able to teach us some wonderful techniques, just like today's project! Gorgeous feather and love the partial stencil on the background. Thanks for sharing for our Dreamweaver theme this week.
April 14, 2015 at 4:03 PM

Rachael said…
Hey girl! Long time no talky! What a great project! You used one of my favorite stencils for your background and three of my favorite colors for the feather! LOVE IT!
April 14, 2015 at 5:37 PM

March 10, 2016
This is a very exciting week for the Stampendous team! We are hanging out with the ultra cool Deco Art Mixed Media team, each using each other's products to share some incredible creations with you. These companies go hand in hand, so using each other's products is easy. And the results are amazing. We are of course featuring Andy Skinner's stamps, who is the DecoArt International Education Coordinator.  And yup, there are prizes! But I want you to go to the Stampendous Blog for all of that info. The link is at the bottom of the post. Now, on to my project. I made a cool wall hanging today. I started off with a piece of MDF and I drilled 2 holes, and covered it with DecoArt's white Gesso. After it dried, I used Andy's Alcohol and Media fluid Acrylics Layering Technique. You can check out his how-to video HERE . Needless to say, it's a great technique, and I loved doing it. Once I finished with the aforementioned technique, I sealed the piece w
58 comments
Read more